Here are my favorite episodes of television from the past year in no particular order. There is so much good television happening right now, that it took me a while to whittle down this list and I am sure I still forgot a few. I do not think that they are necessarily the BEST episodes from the year, just my favorites. Be forewarned, there are plenty of spoilers ahead.

1. The Good Wife “The Last Call” The death of Will Gardner was this year’s best kept secret and I have only recently started to get over the loss of this character. The episode dealt with the aftermath of that death and the performances were just brilliant. Not only did they kill off this beloved character, but they killed off the notion that a show can not survive without a love story.

2. Playing House “Bosephus and the Catfish” What’s not to love about a woman dressing up like a male trucker to make sure that her brother is not getting catfished by his new internet girlfriend?! I am beyond excited that the USA Network came to their senses and finally renewed this hilarious show! My goal for 2015 is to become best friends with Lennon Parham and Jessica St. Clair.

3. Orphan Black “Knowledge of Causes, and Secret Motion of Things” Holy Tilda Swinton, do I love this show! It took me forever to decide which was my favorite episode of season two but I finally settled on this one, mostly because I love watching Vic get beat up. This episode also had lots of Felix and Alison together, as well as Sarah pretending to be Alison pretending to be Donnie, which just makes me so happy.

4. Game of Thrones “The Watchers on the Wall” I loved that this episode focused solely on Jon Snow and the battle between the Night’s Watch and the Wildlings. Even though they are outnumbered, the black brothers must defend Castle Black from Mance Rayder’s massive army, who attack the fortress from the north, while another band of wildlings launches a surprise attack from the south of the Wall. It was epic and made me finally appreciate the amazingness of Kit Harington.

5. Sons of Anarchy “Faith and Despondency” I loved the finale and thought it was a perfect ending for the series, but this is my favorite episode of the season. This is the episode where everything kind of kicked into high gear. Everything that had been building all season finally started to fall into place. It started with a fantastic sex montage, featuring most of the main cast, and ended with this beautifully emotional scene between Venus and Tig:

Venus: “I know what this is, Alexander. Why you’re with me.”
Tig: “What are you talkin’ about?”
Venus: “You’re a man who dares to dance with the freaks. I perpetuate that deviance for you. Allow you to show the world that you live outside the box. But, I know that’s where it ends for us and I understand. It comes with the territory of my complicated identity. But my…my feelings for you are simpler. They live very much inside the box. I’m afraid, Alexander, that…I may have fallen…in love with you.”
Tig: “I-I don’t know what to say.”
Venus: “Please, let me say it for you. I’m a man. I am a man who knows she’s a woman. And that’s exactly where I’m supposed to be. That’s the criss-cross that I’ve come to love. I don’t want the surgery. I don’t want to undo what God has given me. I-I know how beautiful I am.”
Tig: “You are beautiful.”
Venus: “Thank you. I’m..I’m gonna need to put some, some distance between us. At least until I can, uh, climb outside the box again.”
Tig: “Yeah. You’re right, baby. About me. About everything. This is my criss-cross. Because, when I’m with you, I don’t have any secrets, I mean, I can’t. I-I have to open myself up for this and you see everything. All the things that I hide, all the shit that I hate about myself, you see it all, baby. You see it all. And through all that, you still love me? Wow. I mean, I’ve never had that. Ever. With anyone. In any box. You know? But, when I try to get close, you know, to feel…”
Venus: “Normal.”
Tig: “Yeah. Yes. I-I just, I can’t hook it up.”
Venus: “I understand.”
Tig: “No, let me finish, baby. But I want to. I want to. I want to feel…what it’s like…for you to be mine. I want to be able to go anywhere, any place with you being mine. Come on, baby. Why don’t you just go get yourself cleaned up. Put on a pretty dress. Put those flowers back in your hair. Cause I want to hear your lilt when you say my name. Cause you are my..my sweet, my beautiful Venus.”

6. Enlisted “Alive Day” I know I talk a lot about this show and how much it still upsets me that it was canceled, but it was just so good!! They walked the line of humor and drama so well and this final episode was a perfect example of that. I will never stop telling you to go back and watch it. We are brothers. 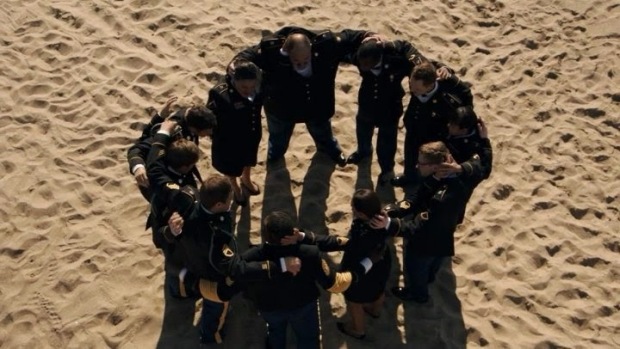 7. Masters of Sex “Fight” Masters and Johnson spend the majority of this episode in their hotel room “working on their study” and talking, but their performances are riveting. I sometimes forget just how good this show really is until I go back and re-watch certain scenes and then I am blown away for a second time. It is quiet but very powerful.

8. Jane the Virgin “Chapter One” This show has actually gotten better and better with each new episode, but I am listing this first one because of how the pilot just totally caught me off guard. I was not expecting it to affect me like it has continued to do each week and it is absolutely my favorite new show of the Fall.

Honorable Mentions: Kingdom “Set Yourself on Fire,” The Affair “1,” Arrow “Unthinkable,” New Girl “Background Check,” Outlander “The Wedding,” The Newsroom “What Kind Of Day Has It Been,” Shameless “Lazarus,” and Agents of S.H.I.E.L.D. “What They Become.”

I wanted to get this list up before I head home to Philly tomorrow, so it is possible that Sunday’s episodes of Homeland and The Affair could have made the list. I also may add tonight’s White Collar series finale to my Honorable Mentions but, so far, this final season has not been blowing me away.

Did I miss any of your favorites? Let me know in the comments!

I wish you all a very Happy Holiday and a Happy New Year, and I look forward to writing for you and hearing from you in 2015! xoxo