I have never been a big fan of Valentine’s Day. I do not really understand the point of this holiday. In high school, one boyfriend took me on a date to see the movie My Favorite Martian. So romantic. However, I do enjoy watching other people make fools of themselves in the name of romance. Which is why, this year, I made a list of my favorite episodes in which people’s holidays do not go as planned.

1. Buffy the Vampire Slayer “Bewitched, Bothered and Bewildered”
It is bad enough to be single on this holiday, but to also be tormented by your ex-boyfriend (who happens to be a soulless vampire), only makes things worse. Also, after Cordelia breaks up with Xander, he blackmails Amy to get her to do a love spell for him. Unfortunately, the spell affects every woman *but* Cordelia, and things turn deadly as the women fight each other for his affections. 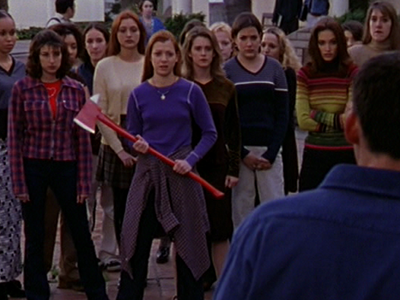 2. Friends “The One With The Candy Hearts”
Joey accidentally sets Chandler up on a blind-date with ex-girlfriend Janice. Ross and his date end up at the same restaurant as his ex-wife Susan, and he invites her to join his date when she gets stood up. Meanwhile, Rachel, Monica and Phoebe have plans, so they agree to take part in Phoebe’s cleansing ritual, which has them setting fire to items from their ex-boyfriends. Rachel throws in a bottle of grappa, and the fire department has to be called.

3. Smallville “Persuasion”
Clark accidentally ingests gemstone kryptonite, which makes everything he tells someone he *wants* into a reality. This might sound ideal, but not when it turns your career-oriented girlfriend into Suzy Homemaker, and sets your best friend on a mission to break the two of you up. Also, Zod figures out what is happening and uses Clark’s new ability against him, which puts Tess in danger.

4. Happy Endings “The St. Valentine’s Day Massacre”
Penny is waiting until after Valentine’s Day to break up with the guy she’s been dating, and then convinces Dave that his girlfriend is doing the same to him. Brad makes big plans for himself and Jane, but goes to the dentist before his big evening and ends up having to be drugged because of a cavity. Alex is the only one excited about the holiday but, while on her way to a party, gets mistaken for a hooker and gets arrested. Meanwhile, Max spends the evening driving his limo and ends up picking up ex-boyfriend Grant.