Major League Baseball playoffs are in full swing (Go, Astros) and, there are not nearly enough shows about baseball, or that even include characters that at least play baseball. Here is my list of players, and really just anyone baseball adjacent (coaches, announcers, etc.). I did not include episodes in which regular characters play a random game of baseball, but I did include guest stars who only appeared in one episode of their particular show.

1. Samuel “Mayday” Malone – Cheers
played by Ted Danson
Sam was a relief pitcher for the Boston Red Sox, but had to retire early due to his alcoholism. Sam now owns a Boston bar. This is still one of my favorite shows of all time.

2. Edmund Gonzales – Necessary Roughness
played by Adam Rodriguez
Eddie is a baseball slugger who suddenly cannot hit, and seeks help from psychotherapist Dr. Dani Santino. The show usually centered around football, but I always enjoyed when they explored other sports.

3. Genevieve “Ginny” Baker – Pitch
played by Kylie Bunbury
Ginny is a pitcher, and the first female player in Major League Baseball. She is a starting pitcher for the San Diego Padres. I am still not over the cancellation of this awesome show.

4. Joe, The New Yankee – Sex and the City
played by Mark Devine
Carrie catches a fly ball at a New York Yankees game, and uses her press pass to score a date with the new Yankee. They go on a few dates but, she ultimately breaks up with Yankee Joe. Considering the show was set in NYC, which is a big sports town, I am actually surprised that the girls did not date any other professional athletes.

END_OF_DOCUMENT_TOKEN_TO_BE_REPLACED

It is pilot season, which means networks are deciding which scripts they want to see made into pilot episodes and then, ultimately, which of those pilots will get made into full series. While we wait to see which shows will get picked up this year, I started thinking about my favorite pilots. Not all of these shows made it past their first season, some of them did and eventually lost me, but they all had great first episodes. For fun, I put them in chronological order, and there are definitely spoilers.

1. Cheers – Give Me A Ring Sometime
While waiting for her fiancé Sumner to get his grandmother’s ring from his ex-wife so they can go to Barbados and get married, Diane Chambers is introduced to all the interesting employees and regular patrons at this Boston bar. After Sumner returns an hour later only to leave again, Diane calls the airline to change their flight and discovers that he has left her and gone to Barbados with his ex-wife. Owner Sam Malone feels bad for Diane and offers her a job. This is still one of my favorite series of all time, and it all started with this episode. Sometimes you really just wanna go where everyone knows your name.

2. My So-Called Life – Pilot
So, she started hanging out with Rayanne Graff, because it seemed fun and because, it seemed like if she didn’t, she would die. That may sound overly dramatic, but that is exactly what Angela says in voice over at the beginning of this series. Angela is a typical high school student in the suburbs. She starts hanging out with new friends that her parents do not really approve of and she lies about where she’s going. She thinks about having sex with the boy she has a crush on, and she daydreams about him in class. From this very first episode, this show just felt like it was about my life and it still speaks to me today. The characters talked to each other like real teenagers. They did not have philosophical conversations about issues happening in the world, they talked about the things that teenagers talk about: things that directly affect their lives at that particular moment.

3. Sports Night – Pilot
This show takes place at a fictional sports show called Sports Night, with anchors Dan Rydell and Casey McCall. It is executive produced by Dana Whitaker, with the help of associate producers Natalie Hurley and Jeremy Goodwin, and their staff. They all work under managing editor Isaac Jaffe for the Continental Sports Channel (CSN). Still getting over his recent divorce and becoming disillusioned by the state of sports, Casey contemplates leaving the show. After an argument with Dan and a historic run by a South African distance runner, Casey ultimately decides to stay. In this episode, we also see how much Dana and Isaac butt heads with the network, but also how loyal they are their staff. Awful laugh track aside, this pilot is still one of my favorite episodes of television ever.

4. Alias – Truth Be Told
Sydney Bristow is a typical grad student. She has two best friends, Will and Francie, and she just got engaged to her doctor boyfriend, Danny. Oh, and she also works for a covert branch of the CIA called SD-6. After Sydney decides to her fiancé her secret, the agency kills him and tries to kill her as well for breaking their number one rule of secrecy. She then learns from her estranged father that SD-6 is actually not the CIA, but an enemy organization, so she goes to the actual CIA to become a double agent. Even though I was not a huge fan of this show as a whole, it started off strong and the pilot drew me in with its kick ass lead character and its secret agent storyline.

END_OF_DOCUMENT_TOKEN_TO_BE_REPLACED

This has felt like one of the longest weeks ever, and it is still only Thursday. I just wish that I could grab a drink at one of these awesome bars. Okay, you should probably avoid most of these places, but visiting them would definitely make your life a little more interesting.

1. MacLaren’s Pub – How I Met Your Mother
Get hit on by Barney or have him introduce you to Ted, witness many a high-five, and maybe hang out with Nick Swisher (or get the chance to heckle him).

2. The Bent Elbow – Witches of East End
Party with the Beauchamp women, taste test one of Freya’s (hopefully harmless) magic potions, and maybe avoid the painting in the bathroom. 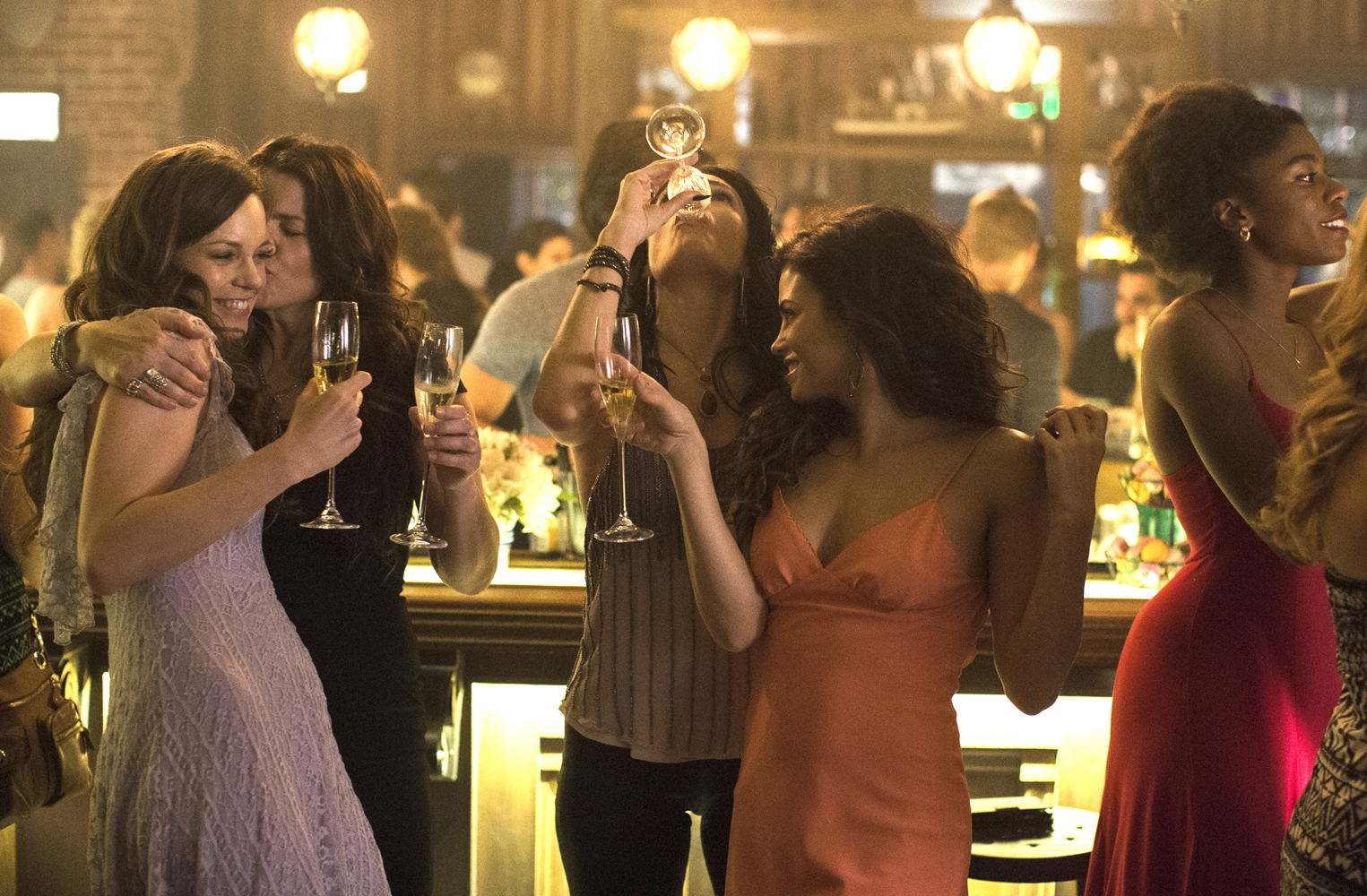 3. The Alibi Room – Shameless
Get drunk with Frank Gallagher and listen to his next crazy idea first-hand, play some pool, or go upstairs to spend time with a Russian prostitute.

4. Boyd’s Bar – Justified
Unless you just cannot find any bourbon elsewhere, the only other reason to be in this bar would be to join Boyd’s crew. Either way, just make sure you are well-armed.

END_OF_DOCUMENT_TOKEN_TO_BE_REPLACED

I am a big fan of Movember and No-Shave November, especially when guys who do not normally have facial hair grow crazy mustaches to promote men’s health. So in honor of hairy men everywhere, this is my list of male TV characters with the best facial hair. For a couple of the shows, I have more than one character listed because I could not decide whose was the best.

1. Thomas Magnum – Magnum P.I., played by Tom Selleck.
You cannot have a list about facial hair without Tom Selleck. He shaved it at one point and life was not the same, but he is back rockin’ the ‘stache on Blue Bloods.

2. Seth Bullock and Al Swearengen – Deadwood, played by Timothy Olyphant and Ian McShane.
Most of the men on this show had pretty great facial hair, but these two were my favorite. Someone needs to bring back the mustache with a soul patch.

3. Jay Kulina – Kingdom, played by Jonathan Tucker.
Jay is a bit of a wild card and I think his facial hair reflects that. The mustache and chin strap combo is a little crazy looking but it totally works for him.

4. Jax Teller, Opie Winston, Bobby Munson, Tig Trager and Chibs Telford – Sons of Anarchy, played by Charlie Hunnam, Ryan Hurst, Mark Boone Junior, Kim Coates and Tommy Flanagan.
All of these guys have some awesome beards going. Although, it is fun to go back and look at season one when they were a little more clean cut, I definitely prefer their current looks.

END_OF_DOCUMENT_TOKEN_TO_BE_REPLACED

The NFL season is in full swing and my Philadelphia Eagles are 4-1. So, in honor of the awesome Chip Kelly, and in hopes of a win against the New York Giants on Sunday, this week’s list is my eight favorite TV coaches.

1. Ernie “Coach” Pantusso – Cheers, played by Nicholas Colasanto. Coach got his nickname from being the former third base coach of the Boston Red Sox baseball team. He was not the sharpest tool in the shed, but he had a great heart.

2. Sue Sylvester – Glee, played by Jane Lynch. Sue is the cheerleading coach for the William McKinley High School Cheerios. I would not say that Sue is the best coach, in terms of inspiring her athletes, but she does have a lot of trophies.

3. Hayden Fox – Coach, played by Craig T. Nelson. Hayden was the head coach of the Minnesota State Screaming Eagles Football Team before being hired as the head coach of an NFL expansion team, the Orlando Breakers. He often had to deal with the issues of his fellow coaches more than his players. This clip does not really feature Nelson, but is just a funny scene from the show.

4. Math Rogers – Life Unexpected, played by Austin Basis. In addition to being a math teacher, Rogers also coached the Westmonte High School JV Girls Basketball Team. They did not win many games but they always had a good time.

END_OF_DOCUMENT_TOKEN_TO_BE_REPLACED

My mother and I do not tend to watch a lot of the same shows, so it is nice when we find one that we can enjoy together. Sometimes she finds it first and introduces it to me and sometimes it happens the other way around. In honor of Mother’s Day on Sunday, these are the ones we have in common.

1. NCIS – My mom started watching this first and I did not think that I would like it because I tend to avoid procedural shows. She would watch the re-runs on USA and eventually I got into it as well. We prefer the earlier episodes and, while she still watches, I actually gave up in the middle of last season.

2. Gilmore Girls – I found this show in college and when I moved home after I graduated (don’t judge!), I would watch it on ABC Family and she would often watch with me. I am not sure my mom has seen every episode, but she still refers to Lauren Graham as Lorelei.

3. Downton Abbey – This is another one that my mom actually started watching first. She watches a lot of random British shows, so I figured it was another one like As Time Goes By or Rosemary & Thyme and did not initially watch the first season. However, it started to get a lot of good buzz from TV journalists that I trust, so I finally gave it a chance. We love Maggie Smith and her awesome one-liners.

4. Elementary – I started watching this because I like Jonny Lee Miller and then recommended it to my mom. She says that it is on too late for her to stay up and watch it (being on the East Coast) and usually watches OnDemand, so she is often an episode or two behind me, but we enjoy the relationship between Sherlock and Joan.